There are major disruptions on the TPE Network. Click for more information - updated at: 3:34 PM

What’s the secret to a signature dish? According to Tony Singh, TV chef and Where Next Project Food and Drink Mentor, Scotland and the North are lightyears ahead when it comes to cooking. That’s because amazing land for growing and grazing the best produce is right on our doorstep. And the result? Really damn good food. But what are these dishes, where can you find them and how can you recreate them? Tony helps us count down five great Northern dishes, and reveals the inside secrets on why the North and Scotland does them so much better than anywhere else.

What is it: A Northern twist on cheese and biscuits. Lancashire Bomb is a creamy, rich cheese coated in black wax, whilst Eccles Cakes are sweet flaky cakes, filled with currants.

Why the North: Lancashire cheese is special because it uses different curds to create a fuller flavour.

Where to buy it: In Lancashire. You can’t beat the original after all…

When to buy it: When you’re in need of a snack. Neither the cakes nor the cheese are seasonal, so you’re in luck all year round.

Northern secret: Lancashire Bomb is matured over two years to ensure it’s rich and delicious – that’s how it varies from crumbly Lancashire cheese.

Top tip: Eat your Eccles Cake straight from the oven for freshness. Then pair with your beautifully aged Lancashire Bomb for a tasty snack…

What is it: Not technically a dish, but worth a mention! Craft beer is lager or ale produced by small, independent microbreweries.

Why the North: Because we’re a creative bunch. From classic brews to fruit infusions, we’ve done it all.

Where to buy it: Across the north. Try specialist bars (like The Hop in Leeds), markets (like Bolton Market) or even convenience stores (like the Londis on Penny Lane in Liverpool). Half the joy is in finding these little gems…

When to buy it: All year round.

Top Tip: Beer isn’t like wine – don’t save it and hope its value will increase! Hops don’t age well, so drink within the sell-by.

What is it: A Scottish dish for getting rid of your leftovers. Its staple ingredients are potatoes and meat.

Why the North: ‘Stove’ means to ‘stew’ in Scots, so it’s our version of the wholesome winter favourite.

Where to buy it: No need to buy anything specifically – the beauty of stovies is that you can use whatever you have in the fridge.

When to buy it: All year round – and you can vary the ingredients depending on what the local butcher recommends that day.

Top Tip: Accompany with oatcakes if you need something to mop up that delicious sauce!

What is it: A gooey gingerbread cake from Leeds.

Why the North: Because it’s a cake made from oats, not wheat. West Yorkshire parkin is famous for using oatmeal and treacle.

Where to buy it: Buy the ingredients from the supermarket and cook at home.

When to buy it: It’s traditionally eaten on Bonfire Night, but you can get it throughout the winter months.

Northern secret: Yorkshire bakers will ensure there’s enough time to store after baking, so that the parkin becomes soft to eat.

Top Tip: Pair with blue cheese for a twist on a classic. 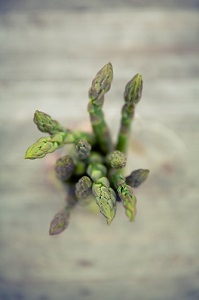 What is it: Tony’s signature dish!

Why the North: Because the fields in the North West used to produce asparagus for sailors in Liverpool. The famous Asparagus Trail is run by the National Trust in Formby and tells you everything you need to know about this veggie.

Where to buy it: Your local greengrocer.

When to buy it: Asparagus is in season from St George’s Day (23rd April) to the longest day of the year (21st June).

Northern secret: The spears on the plant are left once the season is over, otherwise it won’t produce any healthy spears the following year.

Top Tip: Now that would be telling - why not apply for the Where Next Project to ask Tony for his tips on making the best asparagus tart!